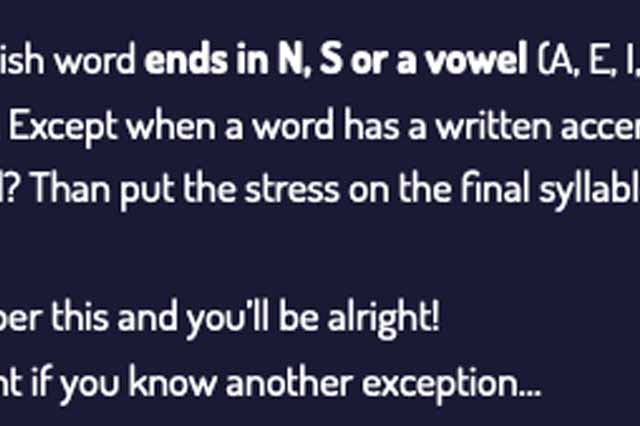 Spanish word stress is the key to having good and proper Spanish conversation skills. It is one of the first and most useful things someone taught me when I started to use Spanish: The rule of thumb when it comes to pronouncing words in Spanish. Where to put the stress? What are written accents for? Read this 2 minute lesson and you will never pronounce your Spanish words wrong:

Spanish words are stressed on the second to last syllable if the words ends in a
N, S or a vowel (A, E, I, O, U).

Practice this rule with words you most like know:

Like everything in Spanish, there is an exception to the rule.

This one is a pretty easy one to spot. What is different between this word compared to the other ones? There are two exceptions to the rule of thumb above.

Exceptions to the spanish stress rule:

Does the word have a written accent on it? Than the stress always falls on that syllable.

Does the word end in something other than a S, N or vowel. And does it not have a written accent? Than put the stress on the final syllable.

Lets see if you are able to put the rules you read above to good use. Tap the correct answer in the test underneath:

Interested in doing more quizzes to improve your Spanish language skills? Check out what else we have for you!

If a Spanish word ends in N, S or a vowel (A, E, I, O or U) than the word is stressed on the second to last syllable. Except when a word has a written accent, than stress the word on that syllable. Does this not apply to the word? Than put the stress on the final syllable.

Remember this and you’ll be alright!
Comment if you know another exception…

1 thought on “Word stress in Spanish”