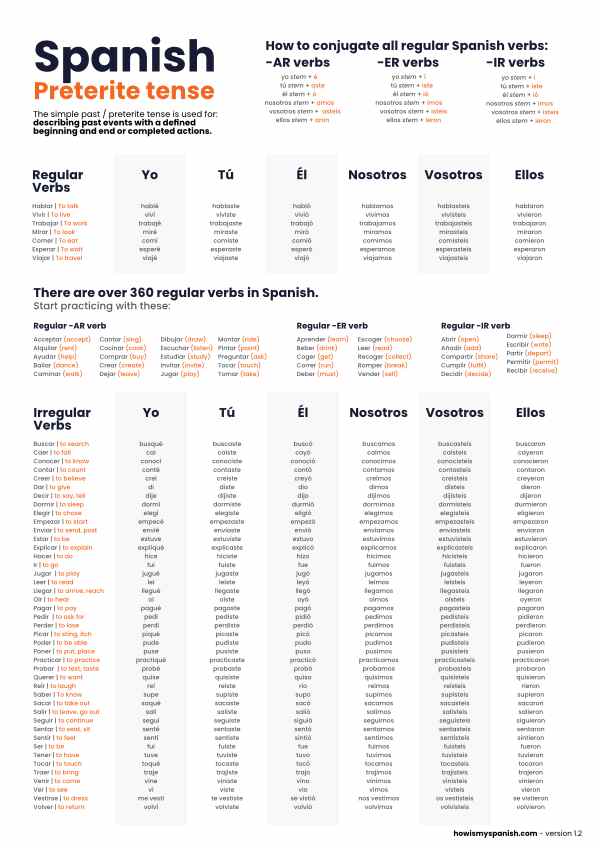 The preterite tense in Spanish, also called Simple Past or Pasado simple, will most likely be the first or second form of the past tense that you will learn. The Preterite tense (simple past tense) together with the Preterite perfect indicative (Present Perfect Indicative) is without doubt the most commonly form used to explain something in Spanish.

This poster and PDF will give you the 99 most often used Spanish verbs in the Preterite tense. It is a guide on how to fluently use the Simple Past in any day conversation and writing. Order it here, print it out and keep it at hand to utilize when you need it!

How to form the preterite tense

To form the Preterite tense in Spanish you will need to the endings of the conjugation by heart. It might seem pretty intimidating when you first see the 100’s of Spanish verbs conjugated in the Preterite tense. However, don’t panic. There is a simple trick to learn this tense in a matter of minutes.

There are over 360 regular verbs in Spanish. And all of them are conjugated in the same way. Spanish verbs always end in AR, IR or ER. Therefore we can categorize them and simply change the ending. Follow the charts below to see in what way the verb ends.

Once you know these 3 lists by heart you will be able to conjugate in the simple past tense in no time. However, the other half of the Spanish verbs are irregular, which means that cannot be conjugated like all regular verbs. Although the ending mostly stay the same for these verbs, the stem is often changed in different forms and different tenses.

Usage of the preterite tense

The Spanish preterite tense can be used when talking or explaining about:

Usually the use of the Preterite tense is used in combination with words indicate the time that it happened. This is because we only use this tense when we do not talk about habitual events / actions that have happened, but it always indicated a one time event. Words that give away the Preterite has been used are for example:

Also think of any other phrase or words that indicate a time reference.

All conjugations in the preterite tense

Looking for a list of all Preterite conjugations. Easily search and filter them all. Click on the link

Other tenses in Spanish

Make sure you also have a copy of the Spanish conjugation blue print for all different tenses in Spanish.