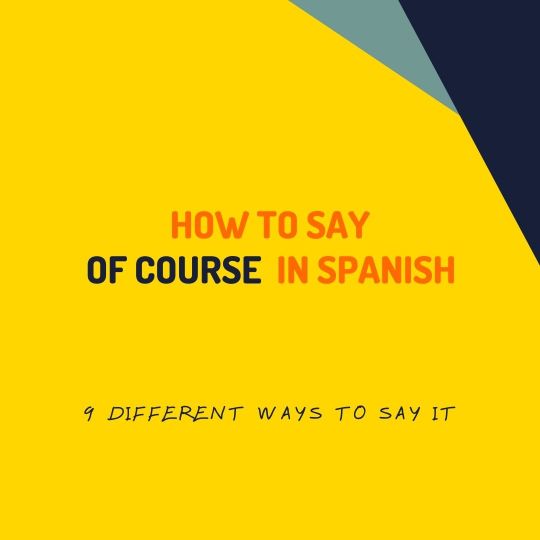 Spanish for “Of course”

The simple word for “Ofcourse” in Spanish is: Por supuesto. However, did you know there are may other translations for this word in the Spanish language?

The phrase “of course” in Spanish is a simple form of agreement an easy supplement to a line of thought and a proper answer of plenty of questions. In this blog post, we will cover the meaning of the language and some of its more common use. There are several ways to say “of course” and we’ve listed 9 of the most common ways to use the term in everyday Spanish expressions including in our latest blog post.

9 right ways to say ‘Of course’ in Spanish

Por supuesto is a very common word in the Spanish language. It is often translated to “of course” or “sure” and often used with the verb “ser”. Por supuesto can be used in the following ways:

Some examples of the use of Por supuesto:

Desde luego means “of course.” It can also mean “without a doubt” or “without question.” Some example sentences with “desde luego” in Spanish:

As an adjective, claro means clear or bright. The word is often translated as “clear” in English. However the word is also used a way to say “of course” when used as a noun. For example:

There are many different ways you can utilize the word Claro. Think for example about these combination:

Claro que sí is a common sentence in Spanish. It is an affirmative answer. It can be translated as Yes, of course, however if you deconstruct the sentence: In Spanish, the word “claro” is an adverb that means clear or obviously. The word “que” is a conjunction that connects two words or clauses of a sentence. In this case, it would connect “claro” to “sí”. The phrase “claro que sí” means “clearly yes” in English.

Claro que no is another common response that is the opposite. It is a phrase that is used in Spanish to mean “of course not.” and can be translated as “clearly not.” In most cases, “Claro que no” is used as a negative response to questions, such as ¿No tiene más dinero? or ¿No tienes hambre? or ¿No está listo el café?

Claro está – Claro está is an abbreviation of “claro que sí” (clearly yes) and it is used in Spanish to agree with the other person. For example:

Desde ahora is are Spanish words that can be translated as “from now on” or “from this moment”. It is often used in order to specify a change in process or an event starting from the present moment onward. However we also use it as a form of saying “Of course”

Using ‘of course’ in Spanish

In English, we often use the word ‘of course’ as an adverb to show that something is obvious or expected. In Spanish, however, there is no direct translation for this word.

In Spanish, the appropriate sentence structure to express that something is obvious or expected would be: “por supuesto” which means “of course.” However as you can see above there are many different ways to express this. “Por supuesto” is the obvious translation to use. However you can also learn to get a little bit more creative with your Spanish vocabulary and use different expressions or combinations of words to explain better how you think. Try to figure out if one of the above options you could use with irony in a certain context? One you have learned them by heart, you can practice how to apply them to the right situtation!

Words and phrases used to say something Is Obvious

Using the word ‘Of course’ is to show that you feel that the action or situatiion is clear, however instead of saying ‘Of course’ you can also chose to say ‘obvious’. In Spanish, the word “obvio” is used to say that something is obvious. Other words might be “claro” or “evidente”. Below are some examples of what you might say in Spanish if something is obvious:

Example sentences with “of course” in Spanish:

– Of course you can’t live without tacos!

– Of course, I will buy you a computer.

– Of course it’s not a difficult day for me.