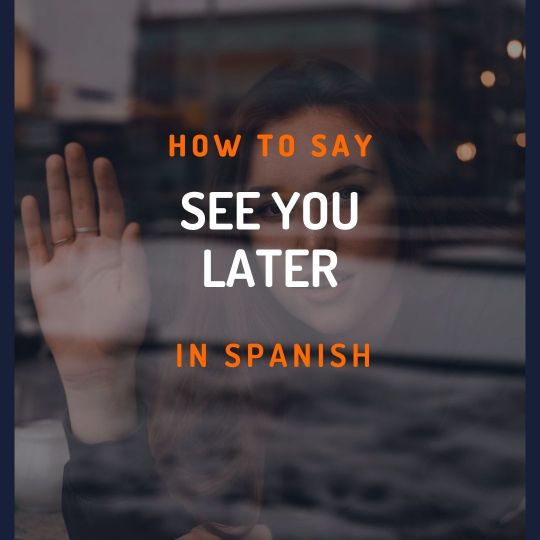 Spanish is a beautiful and popular language to learn, and one of the most common phrases you’ll hear in Spanish is “See you soon.” But how do you say it? There are many different ways to say this phrase depending on what the situation may be. In this post we will discuss the 10 ways to say “See you soon” in Spanish as well as synonyms for this phrase.

– Nos vemos pronto. – We see each other shortly

– Nos vemos en un ratito. – We will see each other in a little bit.

– Cuídate mucho, nos vemos en unos días. – Take care of yourself, we see each other in a few days.

– Cuídate mucho, nos vemos muy pronto. – Take care of yourself, we see each other soon.

– Vamos a estar juntos de nuevo pronto! ¡Nos vamos a ver otra vez muy temprano! – We will be together again soon. We will see each other again very shortly.

– Hasta ahora – See you in a minute

– Nos volvemos a ver. – We will see each other.

As you can see there are many different ways to say this phrase, depending on the situation. For example, if you are talking about seeing someone soon in a few hours or days you would use one set of vocabulary words whereas if it is more long term and involves months or years then another set of vocabulary is used. Let’s break it down to specify to how long you might not see the other person and what is an appropriate thing to say.

In Spanish, how do you say “see you in a minute”?

Some examples of how to say “See you soon” or “See you in a minute” implying that you will see eachother again in just a minutes are:

How do you say “See you tomorrow” in Spanish?

To tell somebody that you will see them later but to imply that it will be tomorrow you could use one of the following sentences:

Say “See you never” or “goodbye” forever in Spanish

Something there are situations where you know you will never see each other again. What are some ways to tell somebody that you’re leaving and not coming back? Here are some sentences:

Slang for “See you later” in Spanish.

Above are all examples of how to say “see you later” in general Spanish. Any Spanish speaker in the world will understand what you mean when using the phrases above. However something people will use slang, as anywhere in the world. Commonly if you’re saying “see you later”, it can be shortened to something like:

It’s not always easy to say goodbye. Whether you’re leaving for a new job, heading back home after your semester abroad or saying farewell to loved ones visiting from out-of-town, it can be hard to know what the right words are in Spanish. Luckily we’ve compiled this list of ways that you can say “see you later” and some translations so that you never feel lost again!

We hope you have found this blog post informative and helpful. Don’t forget to check out our other blogs for more ways of saying “see you later” in Spanish! Hasta luego!