The gerund in Spanish is easy to form and thus a great asset your Spanish language skills that does not have to take long to master. A gerund is the words ending in ING in English. Walking, talking, eating etc.

How to form the gerund in Spanish for regular verbs ending in -AR?

For a regular -AR verb: Form the gerund by adding ANDO to the stem (the verb - ar)

Here are some examples:

How to form the gerund in Spanish for regular verbs ending in -IR or -ER?

For regular -IR and -ER verbs: From the gerund by adding IENDO to the stem (the verb - ir or er)

Here are some examples:

As you can see it is pretty easy to get a hang of this. You simply need to practice as much as you can! It won't take you long before you start to form them naturally. Now for next step... conjugating the irregular Spanish verbs.

How to form the gerund in Spanish for irregular verbs?

As you know there are many irregular verbs in Spanish, meaning the way you conjugate them is not very much predictable. However, luckily for us, the majority of irregular verbs have regular gerunds.

Irregular verbs ending in -ir that have a stem change from O to UE in the present tense, will form the gerund by changing their O to U and adding IENDO to the stem. For example:

Verbs to use with the gerund.

There are different verbs that can be used in combination with the Gerundio.

Obviously Estar is the most common verb to use in combination with the verb, because it explains what someone is doing and what is happening to a person or object. Very useful to know in Spanish.

However, did you know there are two other verbs you can combine with the gerund that will come in very handy:

Most useful gerund's to know in Spanish:

Let us see what the most useful Gerunds in Spanish are to know by heart: 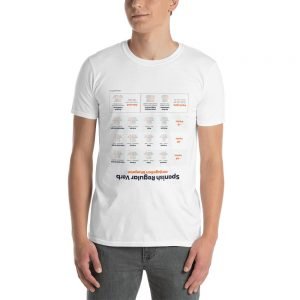 Over 600 verbs in the database.
Search for the conjugations of Spanish verbs: